Do you know what a LEZ is? 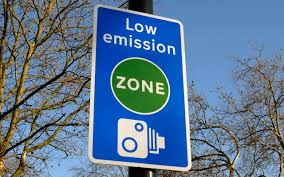 With the launch of London’s Ultra Low Emission Zone, we look at what is happening north of the border to improve air quality. Scotland’s local authorities are at the frontline of encouraging people out of their cars to walk, cycle or use public transport. One tool local government can use in the fight to reduce vehicle emissions – Low Emission Zones (LEZs). Glasgow’s LEZ for buses launched at the end of 2018. By 2022, it is expected that LEZs will be in full operation in Aberdeen, Glasgow, Dundee and Edinburgh. LEZs use financial penalty to encourage people and transport providers to switch to newer, less directly polluting vehicles. The challenge facing local authorities, however, remains how we encourage more people to leave the car at home for everyday journeys, particularly our towns and cities. LEZs are a tool tested across Europe to improve local air quality, but their efficacy in increasing active travel and improving air quality to a standard that improves health is unclear.

The human and environmental cost of outdoor air pollution is stark, with annual deaths estimated to be between 28,000  and 40,000 in the UK. Illness and lost productivity linked to traffic emissions costs the UK economy an estimated £20 billion each year. In Scotland, 2,500 deaths and a shortened average lifespan of 3-4 months are consequences of the air we breathe. Those consequences disproportionately affect children, older people and people with respiratory and cardiovascular illness. Poor air quality has a greater effect on people living on lower incomes. They are more likely to live in high traffic areas, own fewer cars yet experience the worst effects of traffic and air pollution.

What are low emission zones?

The DVLA are developing a database for the public to check their vehicle. In the interim, Transport for London have launched a checker. Charges or fines are imposed on non-compliant vehicles entering a LEZ. The types of vehicles affected vary around Europe, but the focus is usually on heavier vehicles, diesel lorries and buses. Methods of enforcement range from ANPR cameras to coloured vehicle stickers monitored by local police. In Hamburg, two streets are heavily restricted with only diesel cars and lorries meeting the Euro 6 standard able to enter. Few existing European LEZs, however, affect private cars. London’s new Ultra Low Emission Zone is an exception rather than the current rule. In Scotland, the government has committed to LEZs affecting both petrol and diesel cars.

LEZs are not implemented in isolation, they are part of wider air quality action plans that seek to reduce emissions from many sources, including industry and homes. Of note is that although many LEZs in Europe were introduced with little public consultation but public compliance and support is generally high.

How engaged are the public?

To date public awareness of LEZs in Scotland has relied on press coverage, a national website and local authorities consulting on the scope and size of proposals. The success of LEZs relies on engaging people in how air quality affects them, how they can change routines to reduce exposure and, crucially, how they can adopt healthier travel habits to include walking, cycling and public transport use. There is opportunity to engage communities to take practical action. Camden Air Action is just one example of a local authority bringing people and community groups together to raise awareness and explore local solutions to poor air quality. There are also opportunities to engage with employees and employers, for example, through campaigns on air quality in urban offices.

The answer is yes, but not in isolation and more research is needed. An Airuse literature review found that LEZ impacts depend on scale, scope and traffic data robustness. A study in 2015 reviewed LEZs in Denmark, Germany, Netherlands, Italy and the UK and found mixed results. There was evidence that LEZs in Germany – which restrict cars as well as heavy vehicles – reduced PM10 and NO2 concentrations by around 4 per cent. The study concluded though that it was difficult to separate the direct effects of a LEZ from the effects of other policy measures, day to day weather fluctuations, the economy and normal renewal of vehicle fleets, particularly buses.

Moreover, while air pollution levels may be reduced by LEZs, many health practitioners believe additional action is needed to deliver air clean enough to improve health. A 2019 study published in The Lancet Public Health reviewed data from 2,000 school children living in highly polluted areas of London’s LEZ over five years. Despite recorded improvements in air quality after the LEZ was introduced, there was no fall in the number of children with small lungs or asthma. The findings have led to a major new four year study – The Children’s Health in London and Luton (CHILL) Study. It will compare two groups of primary school pupils, one in central London and the other in Luton. Although the London school is within the new Ultra Low Emission Zone, Luton is also subject to a range of anti-congestion measures. The aim of the study is to find out if a clear scientific link can be quantified between reducing air pollution from transport emissions and improved child health.

Gases and particulates in the air are associated with thousands of premature deaths. Emissions of nitrogen oxides and particulate matter have been linked repeatedly with everything from shorter life expectancy to mental health problems. Interestingly, several studies have shown that it is car drivers who are affected most by traffic emissions, not pedestrians or cyclists. LEZs aim to reduce these elements of air pollution and the impact on everyone’s health.

As well as reducing pollution from vehicle emissions, LEZs can accelerate the adoption of lower emission vehicles, which in turn reduces air pollution in all the areas they travel through. It should be noted, however, that there is considerable debate on the wider environmental impact of manufacturing new cars and scrapping vehicles. It is thought that LEZs encourage people to walk, cycle and use public transport, although it is recognised that this modal shift requires investment in a wide range of supporting measures.

Improving air quality in towns and cities makes them more attractive places to live, work and visit. As part of wider plans to increase walking and cycling, LEZs can help rejuvenate urban centres and can have a positive impact on high streets and the local economy. Numerous studies from across the globe demonstrate the business case for improving the public realm and increasing the ‘walkability’ of towns and cities. Engaging with retailers and other businesses about the direct economic benefits of reducing car traffic and increasing walking and cycling will be a key action.

London’s Ultra Low Emission Zone (ULEZ) came into effect on 8 April and applies to the area covered by the congestion charge. LEZs in Scotland are likely to run along similar lines. From 25 October 2021, the boundary will be extended to a larger area enclosed by the north and south circular roads. The ULEZ zone covers 40,000 cars a day, 19,000 vans, 2,000 HGVs and 700 coaches. Transport for London predicts the ULEZ will reduce car traffic by 5 per cent in central London.

A £12.50 charge is levied on the owner for every day a non-compliant vehicle is used within the ULEZ, including weekends. This charge is in addition to the £11.50 congestion charge operating on weekdays. Lorries are subject to a higher daily charge of £100. Exemptions are:

A scrappage scheme has been announced to cover small business owners (less than 10 employees) and charities with non-compliant vans and minibuses.

London’s congestion charge zone resulted in 30 per cent fewer private vehicles entering the city centre. However, it is thought the effect on air pollution has been impacted by the increasing number of Uber and other private hire vehicles operating in the zone – from 4,000 a day to 18,000. Private hire vehicles (including Uber) are now included in both the congestion charge zone and ULEZ.

What else can communities do?

Idling is when a vehicle engine is left running while parked or stationary for a period of time. Unnecessary idling is already an offence in Scotland under the Road Traffic (Vehicle Emissions) (Fixed Penalty) (Scotland) Regulations 2003. Enforcement by local authority wardens, however, is challenging. Glasgow City Council only issued nine penalties for idling between 2013 and 2017. Pollution caused by idling is not only a concern for Scotland’s cities. Perth and Kinross Council are just one local authority consulting on tackling idling in Crieff through its Air Quality Action Plan.

From the evidence available, tackling idling is best achieved through information campaigns and education. Vehicle Idling Action is a London based group supporting volunteers, local authority staff and pedestrians to engage idling drivers and ask them to switch off their engine. It reports an 80 per cent success rate and 18 London local authorities are now on board. The initiative produces a range of free toolkits for local authorities, hospitals, schools and business to run their own task force. In 2016, a two week anti-idling campaign (PDF document) at locations found there was a 20-30 per cent reduction in peak concentrations of pollutants on action days compared to non-action days.

No-idling zone signs around schools, hospitals, sheltered housing and other hotspots is relatively low-cost option for increasing awareness and decreasing pollutants in areas where the most at risk are exposed. The NICE guidance for local authorities in England provides more detail on this and related measures.

San Francisco’s Sunday Streets is a monthly event that started in 2008. Several streets close to vehicles from 11am – 4pm in a different designated area of the city on the first Sunday of the month. These temporarily car-free zones enable people to walk and cycle freely with live music, markets and other events taking place. Car free days or temporary car free zones operate successfully in many towns and cities including New York and Paris. Edinburgh city council will trial its version – Open Streets – during 2019.

To tackle air pollution in towns and cities residents and visitors need viable alternatives to private car use. Local authorities are well placed to support neighbourhoods who wish to expand travel choice. Options such as car clubs, bike rental and sharing, trip sharing and on-demand mini-buses reduce the number of vehicles on our roads and can change both individual and family travel habits. New housing development on urban fringes – too far to walk or cycle to work, education, shops and services – can force many new households into multi-car ownership for everyday journeys into towns and cities (PDF document). Local authorities are well placed to ensure shared transport options and travel information is made available during the first phase of new housing development and is prominent in marketing to new buyers.