The power of the volunteer 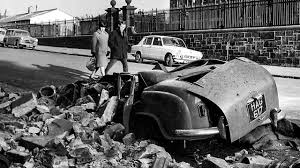 The BBC documentary The Great Storm That Saved a City provides fascinating insights not only into the storm itself but how it played its part in transforming Glasgow’s housing and in particular how it sowed the seeds of the city’s community controlled housing associations. These tenant-led organisations have consistently argued for their governance to be an unpaid, voluntary affair. While there is an argument from some quarters to have paid board members, this has been strongly resisted in the community-controlled sector.

Scotland’s housing association sector has always been a diverse one, and time will tell whether it ever becomes more than a handful which pay some of their board members. The long-standing commitment to the principles and practice of voluntarism is the DNA of the community controlled housing association (CCHA) sector but goes well beyond that part of the movement and, critically, doesn’t in any way signify a reluctance or inability to modernise.

The CCHA sector has  been well served by a governance model based entirely on the input of volunteers. But sticking to that model doesn’t mean that they’re standing still in the challenging financial and regulatory environment we all face.

Quietly and organically, CCHAs have been looking at the mix of experience and skills they need to ensure a healthy board/management committee into the future. Some have chosen to advertise, and this has often led to them being able to bolster both the number of board members (some local, some not) and the range of skills and experience available to the association.

One continuing trend is for staff members of one association to serve on the board of another. Apart from being good staff development, this could be said to bring a ‘professional’ perspective to a board without compromising the voluntary ethos.

This ongoing refreshing of boards is genuine change. It may not always have been easy to achieve, but it has meant really effective succession planning whilst maintaining voluntarism. Right now there is no reason to believe such an approach won’t stand us in good stead for a very long time to come.

The issue of staff being part of the board is somewhat different from that of paying non-executive board members, but is part of the same debate. It’s worth noting that it has sometimes been cosiness between staff and board members which has caused serious governance problems in some associations, even without those staff being actual members of the board.

The struggle to see how having staff on the board avoids conflicts of interest and achieves an appropriate separation between the governing body and staff, and between the operational and strategic. Nice, though, to be able to vote through your own proposals.

Big turnover and large loan portfolios can be managed by well-paid staff and judiciously appointed advisers where needed. Yes, the board needs to fully understand what’s going on and be able to ask the right questions, but it doesn’t have to include treasury experts to be effective.

It is hard not to believe that moving towards paid board members can all too often mean a greater preoccupation with number-crunching and a move away from properly understanding what a local community really needs to thrive when so many of its people are facing incredibly difficult times.