The impact of Burn’s Night

Local events are a great way to bring communities closer together. Whether you want to raise funds for a worthy cause, bring about positive change in your area, celebrate something special or simply get to know your neighbours, a community event can help rally the masses.

A topical one today is the celebration of Robert Burns, born 25th January 1759, who is widely regarded as the national poet of Scotland and is celebrated worldwide. A Burn’s

Night can be formal or informal, but most importantly it is a social event and a way for families, friends and communities to come together to enjoy some traditional fayre in the form of haggis (vegetarian options available), tatties & neeps and to celebrate the ‘bard’. However the most important ingredient is to have fun.

So in homes, village halls, hotels & restaurants all over Scotland people and communities will be coming together and enjoying ‘Great chieftain o’ the puddin-race’.

Are we just consumers?

Living in a consumer society we are well versed in paying money and getting goods and services in return, but does this make us less appreciative of what we receive? Do we notice the skills involved in making something, the time & thought that has gone into its creation or listen for all the instruments that make up a tune. If we had to make something from scratch would it make a difference to how we viewed the things around us?

Have a think about all the things that you consume and love. Is it books, music, food, fashion, growing your own vegetables? Maybe you enjoy home cooked food, watching and listening to someone playing the guitar or singing. Or perhaps you admire someone who knows how to code, or builds shelves or fixes cars, but you’ve never thought you’d be able to do something like that.

Consuming is easy. Getting inspired is easy. Following instructions is easy. But when you go from a consumer to a creator, you may start to think about things you never thought about before. Instead of observing and consuming, pick something and try to become the creator yourself. As well as the satisfaction and pride from making something research has shown that creating or tending things by hand makes us happy and enhances mental health. So as the New Year starts why not plan to make something rather than buy it!

In 2014 figures released by the Office for National Statistics showed that people in the UK are among the most lonely and isolated in Europe. The ONS data compared the UK with the rest of Europe. The UK came second from bottom for not feeling close to people in their local area. Germany came bottom and Cyprus came top. Loneliness and isolation can have a major impact on people’s wellbeing and mental health.

In the latest ONS Survey “Measuring national well-being: Life in the UK, Apr 2017” it shows that whilst many aspects of our lives have improved, areas that have deteriorated over a 3-year basis included the mental well-being of the population. 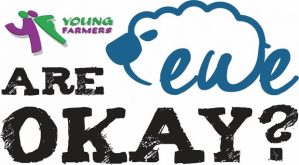 Isolation & loneliness affects many in our countryside and this was recognised by young people working within the agricultural industry. The Scottish Association of Young Farmers Clubs (SAYFC) began the mental health awareness campaign “Are EWE Okay” in May 2016 during mental health awareness week. They recognised that there was a stigma associated with mental health issues, people working in the agriculture & rural industries are often working on their own so are facing isolation and through the nature of the work people often find it difficult to access services or support. Through the campaign they aimed to challenge the attitudes towards mental wellbeing for the industry’s next generation. In October 2017 their campaign was named as a ‘Farming Hero’ during the British Farming Awards.

Social media is often criticised for a variety of reasons, however in this instance it is being used in a positive way by a recognised body to reach its members – young people, who may otherwise have no one to turn to. The principles of ‘Are Ewe OK’ can so easily be transferred to anyone so perhaps we could all ask ‘Are you ok’?

Community Cohesion – Do ants hold the secret to human success?

Solomon thought so, he says to ‘go to the ant’ and ‘consider the ant’ and refers to them as little upon the earth but exceeding wise. He suggests that taking a leaf from their book will preserve us from poverty and give us wisdom. Given Solomon is the richest man the world has ever known (today he would be worth 100 times more than John D Rockefeller), some ant facts are worth knowing.

So, how do ant communities do it?

Ant communities are headed by a queen or queens, whose function in life is to lay thousands of eggs that will ensure the survival of the colony. Workers (the ants typically seen by humans) are wingless females that never reproduce, but instead, forage for food, care for the queen’s offspring, work on the nest, protect the community, and perform many other duties. When the queen of the colony dies, the colony can only survive a few months. Queens are rarely replaced and the workers are not able to reproduce. The lesson;

Without strong and clear leadership – failure is imminent!

Ants are social insects which form colonies that range in size from a few dozen predatory individuals living in small natural cavities to highly organised colonies which may occupy large territories and consist of millions of individuals. Ants communicate and cooperate by using chemicals (pheromones) that can alert others to danger or lead them to a promising food source. The lesson;

Nothing can succeed without clear communication and cooperation.